Dear pilgrim, with The Capuchin Walk you have the opportunity to retrace the fascinating history that marks the birth of the extremely lively Franciscan reform that exploded in the Marche region in the first half of the 16th century. Walking through the enchanting landscape of the Marche inland, where the sea, the mountains and the hills merge into a single vista, you will pass through places that preserve the memory of the origins, learning about the events that gave rise to the Order of Capuchins, and you will be able to enter into the spirit that filled the hearts of those first fathers who, with all their hearts, wished to live the Gospel following the example of St Francis and his first companions.

The Order of Friars Minor Capuchin (OFM Cap) was officially founded on July 3, 1528 with the Zeal for religion [Religionis zelus] of Pope Clement VII, addressed to Brother Ludovico Tenaglia of Fossombrone, after he, together with his brother of the flesh Brother Raphael and other brothers from the Marches, animated by the desire to recover a spiritual observance of the Rule of St. Francis, had fled their respective monasteries in previous years.

Through this holy longing, they connected themselves to the subtle but constantly present thread throughout the centuries of the Franciscan Order’s history, of those who wished to return to the example of Saint Francis and his first companions and to his intention in life, as it had been expressed not only in the Rule but also in the Testament, dictated by the Saint shortly before his death to clearly show his brothers how they should approach the words of the Rule. In fact, St Francis said in his Testament:

“To all my brothers, clerics and laity, I firmly command, out of obedience, that they do not insert explanations in the Rule or in these words saying: ‘This is how they are to be understood; but as the Lord has given me to speak and write the Rule and these words with simplicity and purity, so you with simplicity and without comment try to understand them, and with holy operation observe them to the end”. 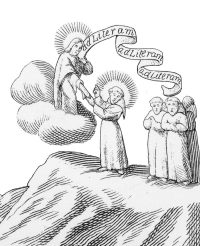 Against the very intentions of Francis, urged on by various ministers, Pope Gregory IX with the Quo elongati of 1230 – i.e. just four years after the Saint’s death – had written that “because of the long familiarity that the saint himself had with us, we have come to know his intention more fully” thereby decreeing that the brothers were not bound to observe the words of the Testament. Already in the last years of Francis’ life, the Order, by then numerous and powerful, had been tempted to deviate from the radical intuition of simplicity of the Christian life of its founder, so much so that it is said that the Saint himself, rising from his bed in a fit of rage, said:

Who are these who have torn the religion of me and the brothers out of my hands? If I can come to the general chapter, then I will show them what my will is” and then he said to the chapter: “My brothers, my brothers, God has called me to the way of humility and has shown me the way of simplicity. Therefore I do not want you to mention any other rule to me, neither that of Saint Augustine, nor that of Saint Bernard or Saint Benedict. The Lord told me that this is what he wanted: that I should be in the world a ‘new fool’, and the Lord does not want to lead us by any other way than by this knowledge! But by your own knowledge and wisdom, God will confound you.

If, however, by the power of his living witness, Francis still kept the order on the tracks he had wanted, with his death and the exclusion of the Testament, a perennial tension crept into the Franciscan order between those who wanted to live according to the pure intention of St. Francis and return to the simplicity of the beginnings, to the life of the first companions, and those who wanted an order that was pastorally better equipped, and who therefore found reason to enjoy papal dispensations from poverty, to hold positions of prestige rather than minor ones, not to live as pilgrims and strangers but to have the property necessary for life and apostolic action (albeit with the fictio iuris of custom). 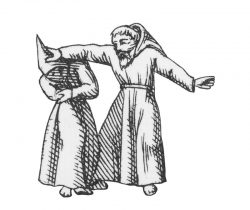 Although over the centuries the second line became the prevalent one, the other option of those who wanted to anchor themselves to the life of Francis and his companions, to his intention, to his desire for a non-juridical but spiritual observance of the Rule (i.e. in the Spirit of the Lord) never failed; first his companions themselves, brother Bernard, brother Aegidius, brother Leo, brother Masseo and others who, after the death of Francis, lived on the margins of the order, taking refuge in the hermitages to preserve the memories of the beginnings; This legacy was later taken up by brother Giovanni da Parma, brother Corrado da Offida, brother Ubertino da Casale, brother Angelo Clareno and others (the so-called “spirituals”); In the 14th century the Observance was born from the same desire, first with Friar Giovanni della Valle, Friar Gentile da Spoleto and Friar Paoluccio Trinci, who obtained permission from the Minister General to retire with their companions to the hermitage of Brogliano in Umbria, where they could fulfil their desire to live the Rule of St. Francis without the adaptations granted by papal letters.

The experience started and by the end of the 14th century, there were about twenty hermitages scattered throughout the Rieti area, Umbria and the Marches. The Observance itself in the 15th century, led by the Four Columns (Friar Bernardino of Siena, Friar Giovanni of Capestrano, Friar Giacomo della Marca and Friar Alberto of Sarteano), took a different position from the beginning, leading the order in other directions, in a middle way that tried to combine spirit and law.

From an understanding of the role played by the hermitages, we can understand the revived desire at the beginning of the 16th century of the Capuchins to lead a hermit life, not to be understood as a yearning for the hermitic life in the strict sense of the word, withdrawn and far from men, but as a way of life that wanted to be linked to the primitive experience of Francis and his associates that had continued to reappear in a genuine way in the hermitages

At the end of a long historical process in the wake of the Spirituals, the Clareno and the Observance, with Brother Ludovico da Fossombrone the conviction was reached that it was not possible to truly live the intention of Francis by remaining within his Order. The life imposed by the structure of the Order, in other words, made it impossible to present the Franciscan ideal in its purity, so the only possible alternative for those who wanted to return to it was to place themselves outside this structure. In short, it was not possible to live like Francis within the Franciscan Order, and so the brothers who had this desire in their hearts drew the necessary consequences.

This persuasion led to the escape of friar Matteo da Bascio in January 1525 from the friary of the Observants of Montefalcone and in the summer of the same year that of friar Ludovico and friar Raffaele from the friary of the Annunziata of Fossombrone. The following three years were full of adventurous vicissitudes (you will discover them step by step along the way) that led Brother Ludovico to obtain the papal bull of 3 July 1528, the Religionis zelus, thanks to the decisive support of the Duchess of Camerino Caterina Cybo. Within a few years of its birth, in spite of repeated attempts to suppress the reform, the Capuchin Order had an explosive expansion, becoming an Order of thousands of friars scattered throughout Italy and soon outside its borders, thanks to the possibility of welcoming into its bosom other Franciscans – and there were indeed many – who were animated by the same intention. 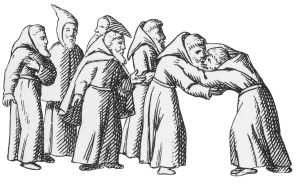 The roots of the Capuchin reform penetrated deep into the life of Francis preserved in the hermit experience of the friars. The Capuchin reform movement is confirmation of the endemic attraction in the Franciscan reality towards the primitive ideal, that is, to the model of the life of Saint Francis and his companions, as it was handed down from the sources inspired by the most intimate of them, Brother Leo, and by the literature of the spirituals.

In the first general chapter of 1535/6 in St Euphemia (Rome) the first Constitutions were promulgated, divided into twelve chapters, which would shape the life of the Order, with subsequent non-substantial adjustments, for over four centuries. In the Constitutions of 1536 more importance is given to the spirit than to the dispositive norms, in view of a programme of perfection animated by the purest Franciscan spirit, which is expressed in the ideal tension of the search for the mens of Saint Francis.

The Rule is considered the “marrow of the Gospel”, a concentrate of the juicy gospel text to which one must give spiritual observance. Chapter VI of the Constitutions affirms the official renunciation of all explanations of the Rule because it is in itself very clear: the Testament is accepted as the only gloss. 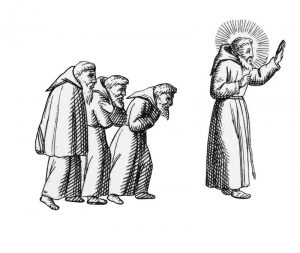 Later on, the Capuchin friars also became recognised as fervent preachers of the Gospel and compassionate servants of the sick and suffering of their times (the description by Alessandro Manzoni in I promessi sposi remains memorable). Within a short time, the pioneers of the Capuchin reform were joined by numerous followers attracted by their prayer, preaching, austerity, sharing and service of the poor.

The reform grew rapidly and spread throughout Europe. Only ten years after the first steps, there were about 700 brothers, divided into 12 religious provinces. After fifty years, there were 3,500 religious in 18 provinces and 300 friaries. Today the Capuchin brothers are one of the largest religious orders in the world, with more than 10,000 brothers spread over five continents in 110 countries.

Dear pilgrim,
To make sure that you can enjoy the beauty of this journey more deeply, we have written the historical novel  The Spirit of the Capuchins  to accompany your steps. With a vivid and adventurous description, developing the plotting stage by stage, the narrator, in dialogue with you, will take you into the courageous and turbulent events that marked the birth of the Capuchins. With your own footsteps, you will be able to walk in the history that you have decided to follow along this path.